Two weeks ago the Washington Post published this article about Pfizer’s rheumatoid arthrisis biologic, Enbrel (Etanercept). The main idea of the article is that Pfizer had data in 2015 showing that Enbrel could be useful in treating Alzheimer’s and didn’t act on it. I don’t want to rehash the discussion about whether or not Pfizer did the right thing. It’s covered nicely by Derek Lowe and John Carroll. Instead, since I’m trying to make it a priority to learn more biology this summer (and in general), I want to talk about Enbrel, its target (TNF alpha), and its history.

From Wikipedia, “Etanercept (trade name Enbrel or Benepali) is a biopharmaceutical that treats autoimmune diseases by interfering with tumor necrosis factor (TNF, a soluble inflammatory cytokine) by acting as a TNF inhibitor. It has U.S. F.D.A. approval to treat rheumatoid arthritis, juvenile idiopathic arthritis and psoriatic arthritis, plaque psoriasis and ankylosing spondylitis.” Let’s unpack this description.

A biopharmaceutical or biologic is a drug that is obtained from biological sources. Some examples are stem cells, vaccines, gene therapy, stem cell therapy, etc. The era of modern biotech companies really began with a class of biologics produced using recombinant DNA. My understanding it that Genentech is the company that really pioneered this approach. If you’re interested in learning more about Genentech, I enjoyed Genentech: The Beginnings Of Biotech.

You may have heard of drugs that end in “-mab”. These are all monoclonal antibodies, which are antibodies that are made by immune cells that are all clones of a single immune cell. Monoclonal antibodies only bind to a single antigen because they all recognize the same epitope. This technology was developed in the 1970s and 1980s and the hybridoma was developed in order to produce them. Hybridomas are made by injecting a mouse with an antigen to elicit an immune response. Then, B cells (which produce antibodies) are harvested and fused with cancerous B cells which are immortal. This process results in a hybrid cell line that is both long-lasting and produces antibodies, thus allowing monoclonal antibodies (that recognize the original antigen) to be harvested. The 1984 Nobel Prize in Physiology or Medicine was awarded for the development of hybridomas. Soon after techniques to “humanize” antibodies were developed.

Fusion proteins are exactly what they sound like: a protein created by combining parts of two separate proteins. This can happen through DNA translocations in cancer. In fact, the Philadelphia chromosome produces the bcr-abl fusion protein which is an oncogene common in chronic myelogenous leukemia (CML). We are also able to use fusion proteins for therapeutic purposes. They are produced by using recombinant DNA techniques (i.e. genetic engineering) to create a fusion gene which is translated into the fusion protein. Etanercept is one such fusion protein. It combines the TNF receptor and the Fc segment of IgG (a type of antibody). The image below of Etanercept’s structure is taken from this page. 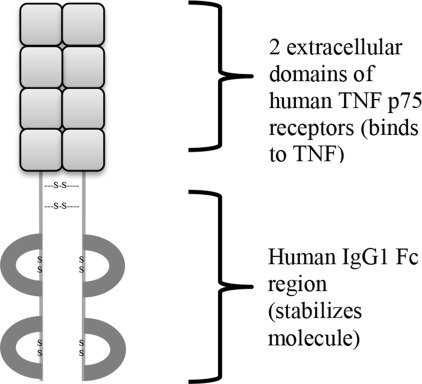 Rheumatoid arthritis mostly affects joints. The major symptom is inflammation of the affected joints and along with this comes swelling, pain, and stiffness, but there are also a variety of other symptoms. Most patients have their wrists and hands affected, but RA can affect other parts of the body. The direct cause of RA is not known, but it is a complex disease with genetic and environmental components.

Psoriasis mostly affects skin. It causes patches of skin to become red (erythema), dry (xeroderma), itchy, and scaly and varies in severity of bodily coverage. There are multiple types of psoriasis, and the most common is plaque psoriasis, which affects nearly 90% of all patients with psoriasis and typically causes areas of inflamed skin that are covered with whitish scaly skin. One trait is the Kroebner phenomenon, which is when an injury to the skin triggers psoriasis at the injury. Again, the direct cause of psoriasis is not known, but it is a complex disease with genetic and environmental components.

A common trait in the diseases above (and in many autoimmune diseases) is inflammation caused by the activation of the immune system against healthy tissue. Everyone has experienced inflammation before. The five classic signs are heat, pain, redness, swelling, and loss of function. As an immune mechanism, inflammation is part of innate immunity.

Inflammation is a complex cellular and molecular process. This summer I’m planning on learning a lot more about the immune system. I learned a bit about it in a mammalian physiology course in undergrad, but that wasn’t at a really deep level and I’ve forgotten most of it.

TNF alpha is a cytokine (a class of proteins that are involved in cell signaling). It plays a major role in systemic inflammation. Most TNF alpha is produced by macrophages, but it is also produced by a variety of other immune cells (and some other cells). Since TNF promotes an inflammatory response, it is responsible for many of the symptoms of autoimmune disorders, which is why they are treated by a TNF inhibitor. There are two receptors that TNF can bind: TNFR1 and TNFR2. TNFR1 is expressed in most tissues whereas TNFR2 is usually found in immune cells. There are multiple ways that TNF is involved in cell signaling, and I don’t know/understand them. For example, the image below is taken from Wikipedia. 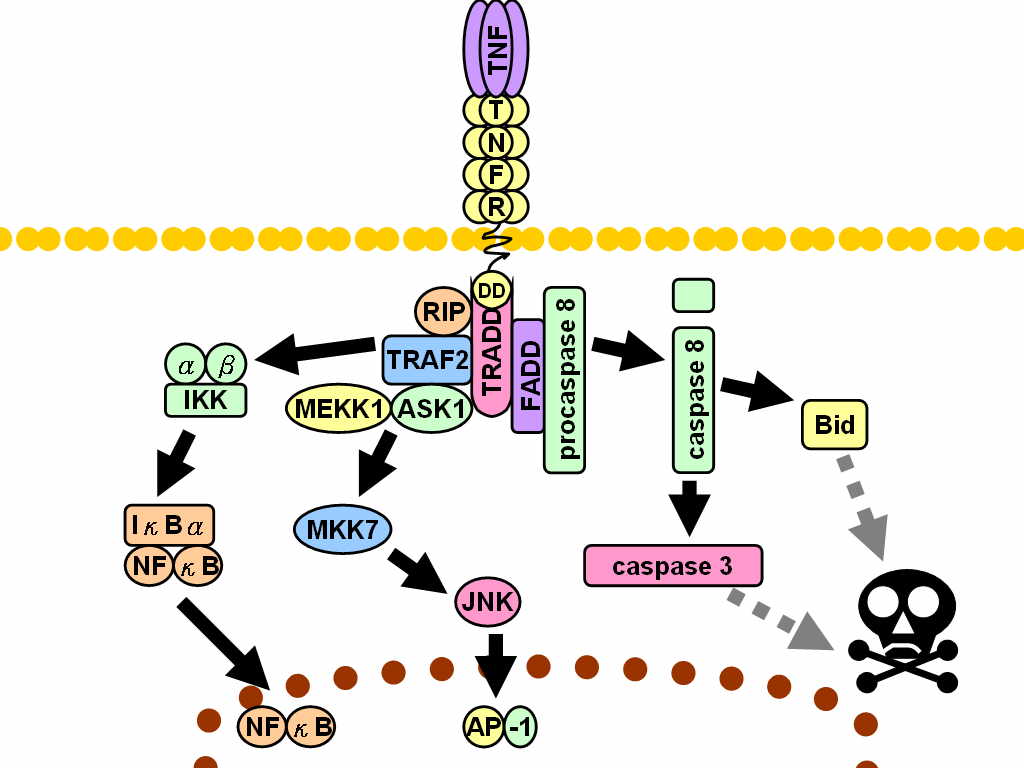 In general, cytokines are a broad class of small proteins that are involved in cell signaling. They are peptides and aren’t able to enter the cell. My impression is that the distinction between cytokines and other cell signaling mechanisms are a little bit fuzzy. Cytokines play an important role in signaling for the immune system. One class of cytokines you may have heard of are interferons, which are important for their role in the immune response to viruses. Cytokines each have have a receptor on the cell surface. Binding causes a cascade of intracellular signaling that is specific to each cytokine.

Etanercept’s structure gives away the mechanism by which it works. Since it contains a TNF receptor, each molecule of Etanercept is able to bind to TNF as a decoy so that TNF isn’t causing inflammatory responses in healthy tissue. The reason that Etanercept is a fusion protein is because this gives it a much longer half-life in the bloodstream which means that it is more effective and longer lasting.

Immunex was the company that developed Etanercept. It was founded in 1981 in Seattle by Christopher Henney, Steve Gillis, and Steve Duzan. Henney and Gillis were scientists while Duzan was en entrepreneur. There is a nice history of the company here. Immunologist Bruce Beutler was the first to isolate mouse TNF and developed fusion proteins to bind to TNF. Beutler sold the IP to Immunex, which developed Etanercept as an FDA approved drug. Eventually, Immunex became a part of Amgen, a major biotech company.

So where does Pfizer come into all of this if Immunex took the drug through clinical trials and Amgen now owns Immunex? Before Immunex was acquired by Amgen, they partnered with a company called Wyeth to market Enbrel. Eventually, Pfizer acquired Wyeth and gained access to some of the rights to sell Enbrel. This brings us to the story in the WaPost, which you can read about in the links in the first paragraph.